🐲-(...) Just watched Wish Dragon, yes, totally because h i m, and honestly is a quite alright movie, I guess it helps when you don't try to compare it to Aladdin all the time ( 1. Disney did not invent genies! 2. Chinese culture already had the legend of a wish dragon 3. I've saw Aladdin but only a long time ago and I barely remember anything 4. Long has some story stuff and character development that matters instead of being only a tool ). Don't worry, no specific story spoilers.

The heartwarming story about trying to re-encounter with a friend living another life can actually be pretty involving, almost to the point I forgot China still is an authoritarian country with a lot social inequality that they don't even hide in the movie. The main character is quite cringe (what do you expect from a 'weird kid' main character) and kinda bland but he does a good job as a main character. Even when I say this move is fine and you should maybe watch it if you want to see h i m, it's honestly still a quite predictable "the real treasure was the friends we made along the way" type of story, the second half of the third act was a bit out of nowhere and could have used some more development time, some people say the ending was a bit 'meh' and felt like a cliffhanger, but honestly I think it's more one of those endings that say other things happen afterward but they don't matter in relation to the story the movie wants to tell, so it still is a conclusive ending, not every story needs a "and this is what will happen to them in the future".

OK, OK, I'll talk about the ele- dragon in the teapot, h i m, did they have to make a character specific for me!? A long dragon (being very biased) that's pink (favourite color), fluffy (always good) and really cute!? I don't care if he is kinda of an idiot comedic character for about half of the movie, because aaa (yes this is me fangirling over a fictional character, happens all the time) how to not like such a good character design aesinhihfas. You know how I said I think there probably isn't going to have a continuation as this is a 'one shot story'? I still wis- want one just to see more of this amazing very huggable derg. 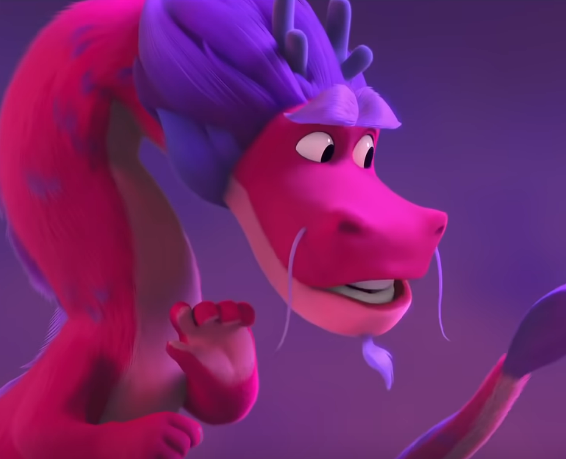 I'm a dragon, I like dragons a lot, what did you expect? This is being self centered but just the truth, I love other dergs :3