The ehrinaki writing system can be described as an alphabet but written as a bad abjad. It is written in two different ways.

On the image, this way is written in dark green.

The original writing, before used for everything, now mainly for names, literature and art, but still accepted as a good use for anything for the historical significance and artistic style. This writing is based on the even older way of writing by carving on trees, so this one honors the tree structure in its design and way of reading.

Each word is a tree, with its root indicating the type of word, be it a normal word, a name or a number; The words are read bottom to top of the tree, when you finish a word/tree, the next one is written to the right of it with the roots on the same level, the next 'line' is above.
You write the consonants as branches of the tree, the next consonant is written on the opposite side of the trunk, with the starting consonant being on the right, so the next is on the left, then right, and so on, with the last one being staight up; Vowels are written as different leaf types on the consonant branch that preceedes it, to indicate that the consonant is after it, make another branch from the top of the leaves, if the vowel is the final syllable, it is written as the 'top' of the 'tree'.

The punctuation is written as ground elements (rocks, flowers, grass) following the line base to the roots.

The numbers, written on a tree with a number root, are read from top to bottom, with the decimal separator written with the tree.

If a tree is too tall, you can split it into another tree by placing the 'word continues in next tree' marker at the top.

Other writing systems (simplified and latin) are written on the ground line.

On the images, purple.

Created after the introduction of the printing press for accommodating the rigid and simple ways of the machines, as a way to not rely on latin scripts, this way is more related to the latin writing, on horizontal lines left to right, still using symbols from the traditional way as a base for the new ones that have a square or thin footprint; One thing specific from the traditional method that was brought was the name root as a marking before names.

Today is is mainly used for genral and small text sections, in conjunction with traditional for more open designed texts.

The vowels are written in an alphabet way. There are markers for 'VC' syllables, and for separaing ambiguous ones. ('pel-a' can be different from 'pe-la') 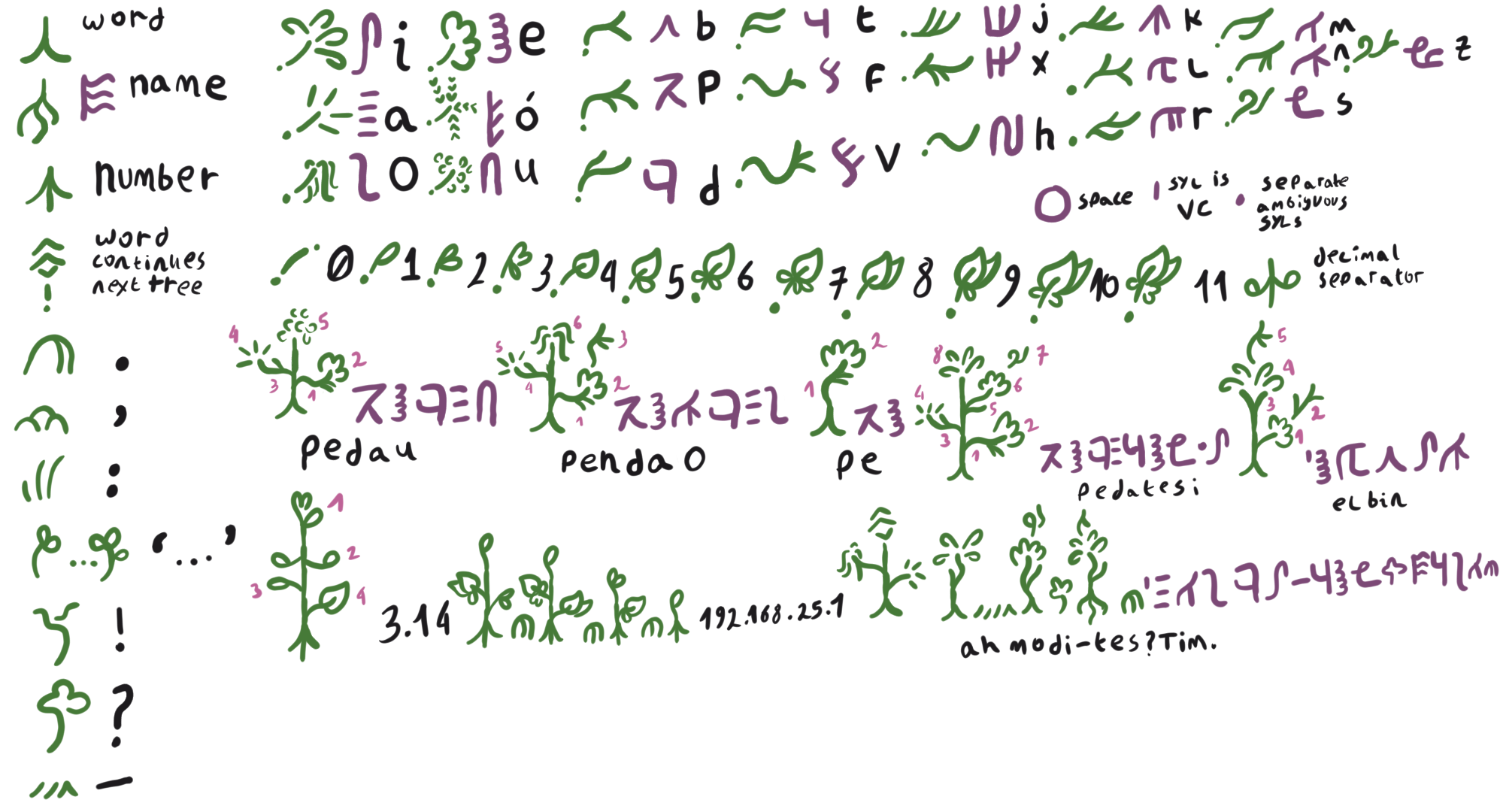 And a few more words to know: